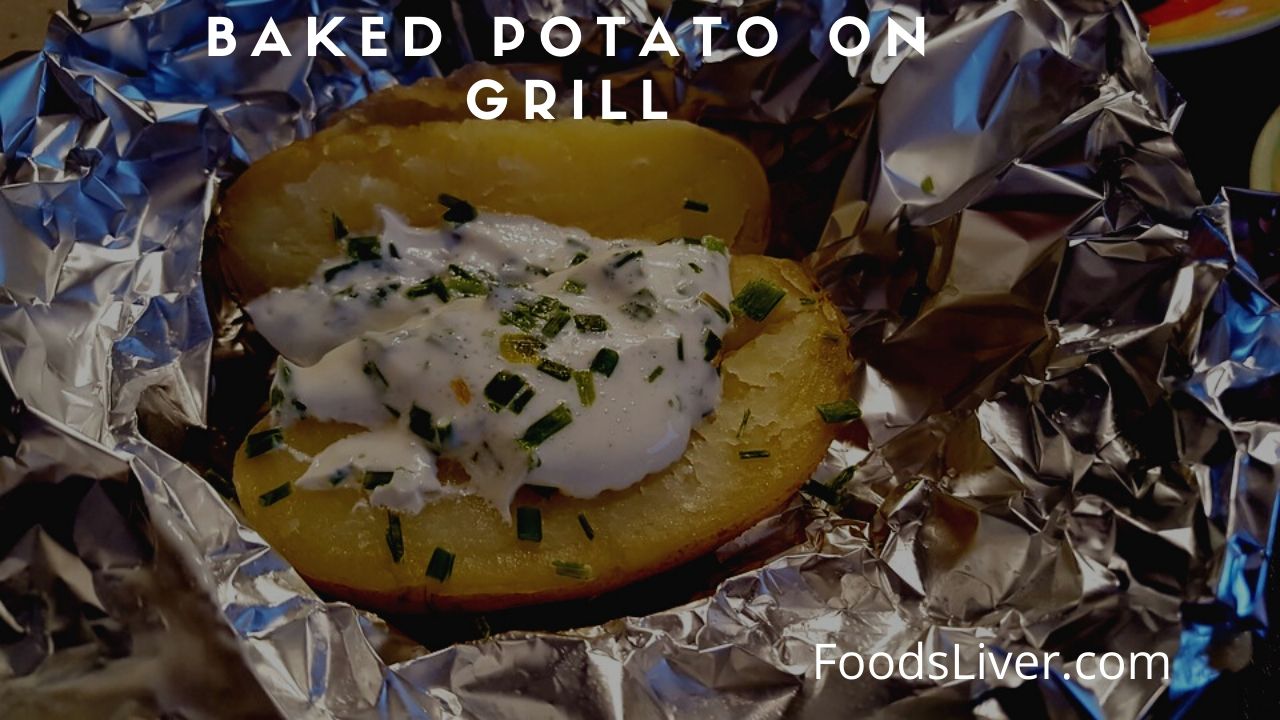 The best thing about this Baked Potato on grill recipe is that they are super soft from inside and crispy from outside. These potatoes can be load with different toppings according to your taste and demands. Along with these toppings taste of this baked potato on grill will enhance.

Apart from this there’s no baby sitting, no use of extra pans and no extra time to make this. You just need 10 minutes and your food is ready. Ah! I forget to mention that they have a salt crust which enhance it’s flavor more.

There are many methods of making Baked Potato on grill and many of them do not gives the taste of BBQ in potatoes. One of method involves wrapping potatoes with foil and than place it directly on grill but cooking this on grill does not gives specific BBQ flavor at all.

Baked Potato along with foil

When we talk about Baked Potato along with foil I personally recommend you guys to cover the potatoes with heavy duty aluminium foil before placing them on grill. Cooking potato in aluminium foil helps the potato slowly to rise in temperature and allows each potato to cook evenly.

I recommend you strictly to use heavy duty foil because if you do not use foil it may burn the potatoes while keeping them uncooked. Covering potatoes with heavy duty aluminium foil avoid the mixture from seeping out while the food is on grill. If you do not have heavy duty aluminium foil than you can wrap two layers of regular foil to increase the strength of foil. Baked Potato on grill without foil may cook food while seeping out anything which may cause difficulty to present a good presentation of your food. The last step is very critical to get this crispy skin that will taste crunchy and delicious and soft and juicy inside.

Why These Baked Potatoes on the Grill Are So Good

Baked Potato on grill can be served in many different ways. You can serve baked potatoes with any of the main course. Baked Potato can be used as side dish or starter as well. You can serve Baked Potato by placing some cheese in between center of baked potatoes. You can place butter or cream as well instead of cheese, it will enhance the flavor of your food. Steamed chicken, broccoli, Salsa sauce, chili sauce, beacon bites all these things can be used s toppings as well.

Potatoes are rich source of proteins and fiber. Covering potato in aluminum foil and baking it in grill will keep all the its nutrition’s safe and make it healthier. This recipe is less in calories because potatoes are cholesterol free and fat free. It is useful for the people who are on diet.

Baked Potato on grill are best baked potatoes you will ever have. They have crispy salt crust with super moist soft and juicy inside. They have a specific BBQ flavor. The richness in its BBQ flavor is due to its unique recipe. By seasoning baked potato with salt and black pepper, wrapping them in aluminium foil and grilling them on preheat grill pan and finishing them on direct heat makes them moist from inside and crispy from outside.

Let me tell you another side dish which is craving satisfy, Do not forget to try out Air Fryer Tatar Tots